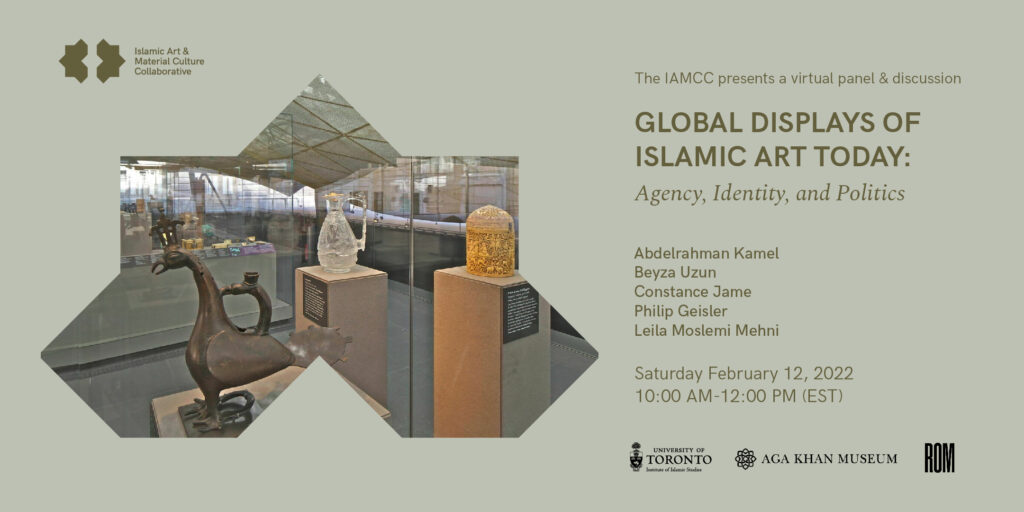 Brief description: Virtual panel discussion on the new and complex ways in which museums and galleries of Islamic art use objects today to communicate broader ideas and narratives in various global contexts.

**Please note that the event will not be recorded.**

Since the early 2000s, numerous museums around the world have reinstalled their collections of Islamic art as new galleries or created entire museums focusing on the arts and cultures of the Islamic world. During the same period, methodological interventions building on post-structuralist and post-colonial theory have begun to challenge long-standing formal and regional categories defining the field of Islamic art history and have impacted the display strategies of new displays of Islamic art. As a central interface between the academic study of the Middle East, its global representation, and the general public, the approaches these museums adopt to mediate between art, material culture, and Islamic or regional cultures play a central role in shaping discussions about the region. At the same time, Islamic art displays are also embedded in heterogeneous local politics and social discourses that serve local, regional or national agendas.

Through a series of case studies from both public and private museums in Turkey, Qatar, France, Spain, Canada and Iran, this panel of international doctoral candidates examines curatorial practice and agency vis-à-vis the politics of museum display and art discourses from 2000 until today. Rather than interpreting Islamic art displays as passive and neutral representations of the past, this panel theorizes them as a contemporary cultural practice that stages spatialized and immersive, ideological narrations of culture and identity. The papers examine new and complex ways in which museums and galleries of Islamic art use objects today to communicate broader ideas and narratives in various global contexts.

Image Below: The Aga Khan Museum

10:05 – 10:20– Objects Between Secularism and the Sacred at Istanbul’s Museum of Turkish and Islamic Art

Paper Abstract: Having transitioned from a caliphal imperial identity to a constitutional and secular republic with a large Muslim population, Turkey is embedded in a complex socio-cultural matrix regarding the handling and presentation of its Muslim heritage. Since 2002, the Justice and Development Party (AKP), which defines itself as a conservative democratic party, has held the majority in Turkey’s parliament. For the last two decades, this government has promoted cultural policies that define the country’s national identity mainly through its Ottoman and Islamic heritage. This paper aims to investigate the shifting ways of displaying the Islamic art collections in two recently reinstalled major state museums of Islamic art in Turkey inherited from the Ottoman Empire: the Museums of Turkish and Islamic Art in Istanbul (2014) and Bursa (2020).

10:20 – 10:35– The Cultural Diplomacy and Contested Modernity of Museological Development in Qatar

Paper Abstract: This paper focuses on the history of art collecting in the Arabian Peninsula, the regional motivations of such practice and how private art collections purchased or inherited by Gulf patrons are being transformed into Western models of museums and galleries serving the state narrative of political soft power through cultural institutions. Through focusing on the case studies of the Museum of Islamic Art in Doha and the Qatar National Museum, the paper highlights how cultural institutions underline a political agenda for modernity, nationalism, and self-realization as part of Qatar’s modernization project, but also for neighbouring gulf countries and highly capitalizing developing nations in the twenty-first century.

Paper Abstract: This paper analyses the historical and political frameworks in which arts of the Islamic world are displayed in France in modern times by examining the reinstallation of the Islamic art galleries at the Louvre, Paris. Established in 1793 as part of the creation of a national discourse with the founding of the First Republic, the Louvre has always been inextricably linked to ideas of French identity and nationhood through art. By contextualizing the new reinstallation of the Islamic collections within the larger context of the birth of the Louvre as a museum and its original purpose, the paper argues that Islamic arts are staged today as part of French national identity within a society characterized by immigration. The choice of displays in the galleries will be discussed from the perspectives of modern design aesthetics, post-colonial political agendas, the transcultural nature of objects and, finally, from the point of view of French identity and nationhood in the twenty-first century.

Image Below: The Louvre

Paper Abstract: This paper assesses Islamic art displays at the Museo de la Alhambra in Granada, Spain, and the Aga Khan Museum in Toronto, Canada. Both museums are situated in socio-cultural frameworks that mobilize relationships with Islam as a device to construct identity-driven stories for the present moment. They attach their collections to notions of heritage as cultural meta-narratives rather than explicitly labelling themselves as museums of Islamic art. The paper interrogates the curatorial strategies employed in both of these museums which present the objects in their collections to foreground narratives of interconnection between historic cultures. The displays of objects in these museums are read as idealized metaphors for their contemporary local environments marked by globalization and immigration that help to sustain Spanish and Canadian concepts of multiculturalism.

11:20 – 11:35 — Political Dynamics of Curation and Waqf: The Malek National Library and Museum

Paper Abstract: This paper investigates current curatorial practices at the Malek National Library and Museum in Tehran, Iran, and examines the policies and procedures that shaped the foundation and administration of the museum from its inception to the present day. Initially founded as a not-for-profit private institution by the distinguished Iranian philanthropist Haj Husayn Aqa Malek (1871–1972), the Malek National Library and Museum was established as a waqf or pious endowment in 1937 to be administered by the Astan-i Quds-i Razavi, one of Iran’s formidable religious charitable trusts tasked with monitoring the museum’s cultural, educational, and curatorial activities. This paper explores the ways in which the Malek National Library and Museum’s curators and educators employ agency to negotiate between the official waqf guidelines stipulated by religious actors and their own autonomous curatorial ambitions and exhibition plans.

The panel will be chaired by Dr Fahmida Suleman, Curator of the Islamic World collections at the Royal Ontario Museum, Toronto, and co-chair of the IAMCC.

Beyza Uzun is a PhD candidate in the Analysis and Cultural Heritage Management program at the IMT School for Advanced Studies (Scuola IMT Alti Studi) in Lucca, Italy. Her broader academic interests lie in the area of the musealisation of Islamic art beginning in the late nineteenth century to the present day. Her PhD research aims to understand how museums in Turkey display Islamic art collections within the changing frameworks of global and local museology and in response to distinct social, cultural, and political environments.

Abdelrahman Kamel is a PhD candidate in the Department of Cultural Studies at Queens University in Kingston, Ontario, Canada. Born in Cairo, Egypt, and raised in Doha in Qatar, he received his BSc in Foreign Service with a major in Culture and Politics from Georgetown University, an MA in Museum and Gallery Practice from University College London, and a second MA in Art History from the University of Toronto. He has worked as a research assistant on projects at the Qatar National Museum, The Media Majlis, and the Royal Ontario Museum. During his specialization in Museum Studies, he concentrated on community engagement, fundraising, and education, focusing primarily on theories around cultural integration in institutions of memory. His doctoral dissertation assesses cultural institutions, heritage, and transnational practices of diplomacy, with Qatar as his primary case study.

Constance Jame is a doctoral candidate at the University of Heidelberg in Germany and a teaching assistant at the Heidelberg Centre for Transcultural Studies. She studied Art History and Archaeology at the Université Lumière in Lyon and the Humboldt Universität in Berlin. She graduated from the University of Heidelberg with a thesis on Iranian contemporary art. She also has a Master’s in Museum Studies from the Ecole du Louvre and the University of Montreal. She worked and conducted research for the Musée d’archéologie Méditerranéenne in Marseille, the Musée de Pointe à Callière in Montreal, the Galerie Esther Woerdehoff in Paris, and the Musée Guimet in Paris, where she pursued research on the museum’s collection of Ottoman textiles. Her PhD dissertation assesses museum discourses and displays of Islamic art in European postcolonial societies since the 1990s. Her research is supported by the Konrad Adenauer Stiftung and the Université Franco-Allemande.

Philip Geisler is a doctoral fellow at the Kunsthistorisches Institut in Florenz – Max Planck Institute (KHI) and the Berlin Graduate School Muslim Cultures and Societies, where he is writing a dissertation about the recent shifts of museum displays of Islamic art in Europe and North America. He obtained a degree in Journalism and Media Economics at the Medienakademie Berlin before studying Art History, Islamic Studies, and Political Science at Freie Universität Berlin and at Harvard University. He has published on early modern Ottoman architecture and urban configurations, the connections of architecture, colonial visual culture, and dance heritage, and the history of architectural branding in the Middle East. From 2013 until 2019, he worked for Art Histories and Aesthetic Practices, a research program of the KHI and the Forum of Transregional Studies in Berlin. As a music manager and dramaturg, he has worked for the Berlin Philharmonic Orchestra and for independent jazz and contemporary music ensembles. He is a recipient of the Ottoman & Turkish Studies Association’s Sydney N. Fisher Prize and is a former fellow of the prestigious Studienstiftung des Deutschen Volkes (German Academic Scholarship Foundation).

Leila Moslemi Mehni is a PhD candidate in the Department of Near and Middle Civilizations at the University of Toronto. Leila completed her BA in Museum Studies at the University of Tehran’s Institute of Cultural Heritage. She earned an MA in Art History from York University, in Toronto, and a second MA in Middle Eastern Studies at the University of Toronto. She has held curatorial and research positions in several museums including the Sheikh Faisal Museum in Doha, Qatar, the National Museum in Tehran, the Aga Khan Museum in Toronto, and the Royal Ontario Museum, Toronto. Her research interests focus primarily on Qajar and modern Iranian art and politics. Her PhD dissertation is entitled “Artistic Visualization in Pahlavi-Era Iranian Periodicals” and draws from a unique archive of thousands of printed periodicals and political ephemera collected by her PhD supervisor, Professor Mohamad Tavakoli-Targhi. She is also a 2020 recipient of the prestigious Mitacs Research Training Award to support her doctoral research.

The Islamic Art and Material Culture Collaborative (IAMCC), is a research network based in Toronto that brings together the capacities and resources of the University of Toronto (UofT), the Royal Ontario Museum (ROM), and the Aga Khan Museum (AKM).

The IAMCC recognizes that the City of Toronto offers a rare opportunity to create a North American centre of study on Islamic art and material culture that can also reflect back on the field the unique political, social, and cultural history of the city’s diverse and multicultural landscape. The IAMCC will create an inclusive space for researchers, curators, and students to combine knowledge production and outreach facilities to create innovative cultural outputs.

The Institute of Islamic Studies (IIS) at the University of Toronto offers a unique, multi-perspective view of Canadian society through the advanced study of Islam and Muslims.

The IIS brings together academics from across disciplines to produce research projects that uniquely fill critical gaps in our understanding of Islam and Muslims in Canada and beyond. The projects study and respond to issues across our social, political, academic, and cultural sectors.

Image Below: The Alhambra 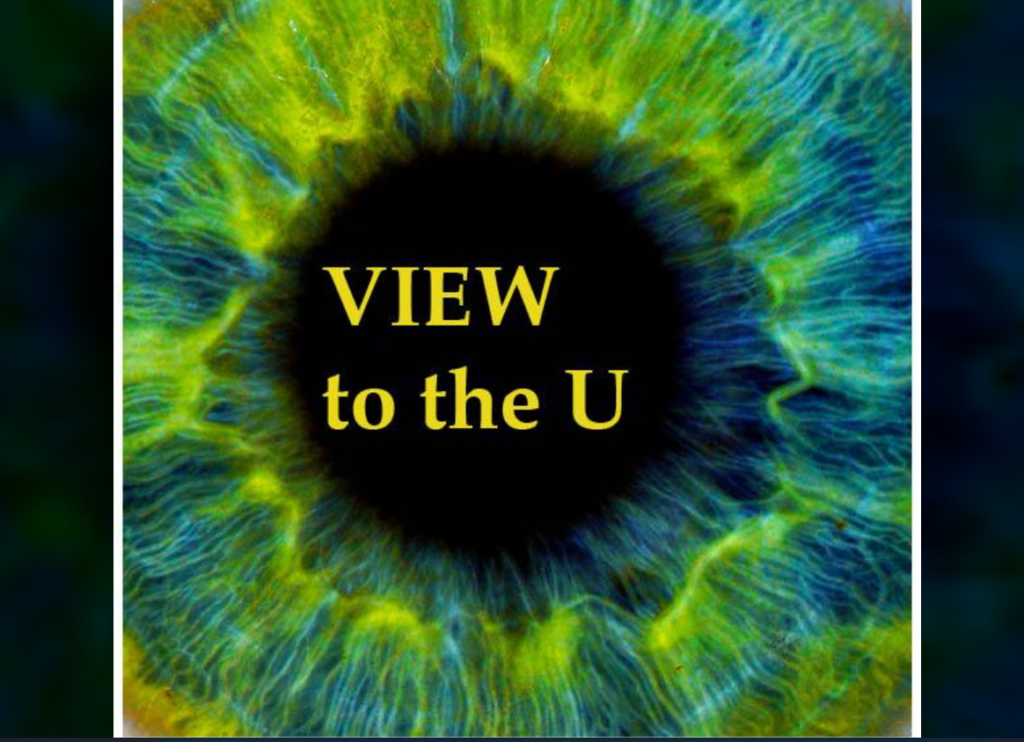 View to the U: An eye on UTM research podcast, Ruba Kana’an

Ruba Kana'an, a historian of Islamic art in the Department of Visual Studies at UofT Mississauga, talks about art and architecture. 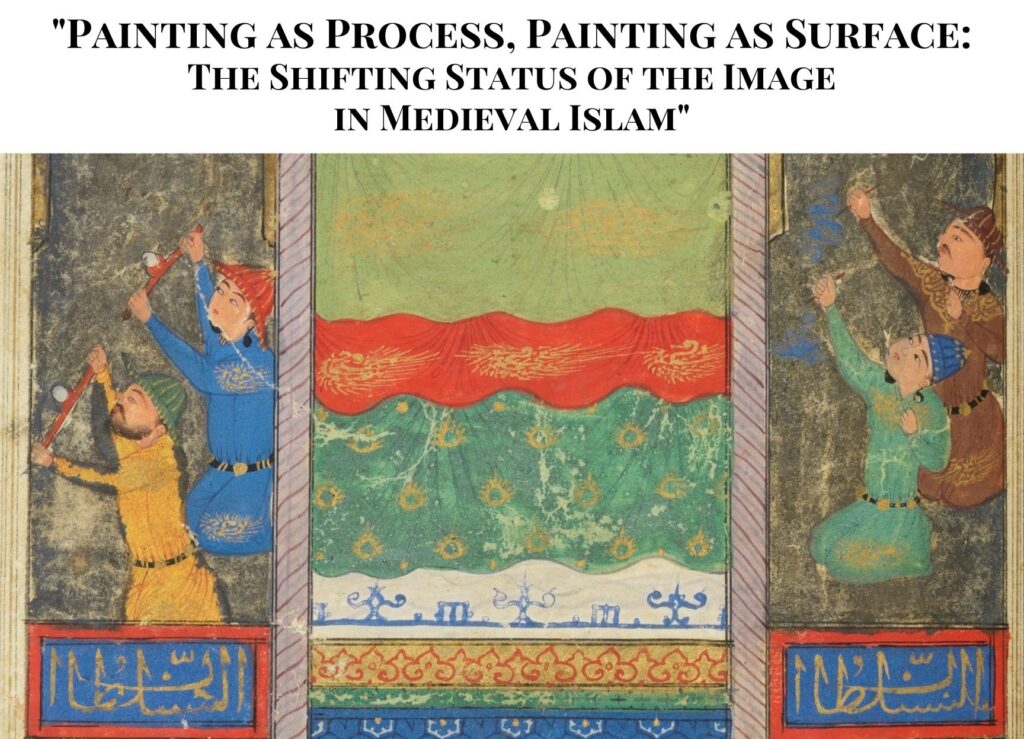 [March 4, 2022] “Painting as Process, Painting as Surface: The Shifting Status of the Image in Medieval Islam”

The Department of Art History Guest Lecture Series is pleased to present: "Painting as Process, Painting as Surface: The Shifting Status of the Image in Medieval Islam"